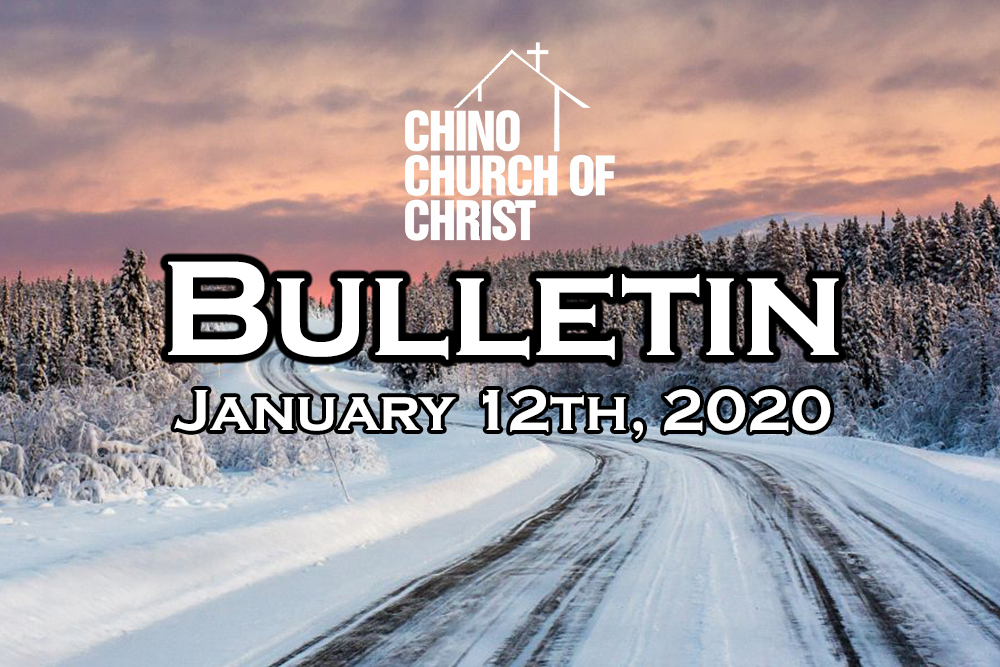 Loving Our Neighbors: Saturday, January 25th, at 8:30AM, meet at the building
Start the day with a hearty and delicious breakfast and fellowship, and then walk
throughout our surrounding neighborhood to pick up trash and minister.
Trash bags, gloves and Church of Christ t-shirts are provided.

World English Institute (WEI) needs Internet Bible Teachers: they offer an English Grammar / Bible course. English is used to go fishing for men and women. New students from every country in the world are starting Bible studies each month. The lessons are automatically graded by the website. Teachers reply to their students’ questions about God and faith. Register to become a teacher at: WorldEnglishInstitute.org/register/teacher. If you have questions or need a demonstration, ask Reuben Lacuata or the Dorlings who are Internet Bible teachers with WEI.

Brittney Cole: Had a fall which resulted in one sprained & one broken ankle.

Warren Burton (Karen Burton’s father): Passed away on December 24th. Please keep him & the whole family in your prayers during this very difficult time.

John Jackson: Brother Jackson was scheduled for surgery (bladder cancer) on January 6th.
But on December 24th, he went to the hospital and was given an emergency 4 pints of blood. The doctors decided to go ahead and perform the surgery immediately. He has been transferred to Heritage Park Care Center (formerly Sunset Haven), room 208A. Cards can be sent to ‘PO Box 3177, Montclair, 91763’.

Several Christians in the Guarapuava, Brazil congregation are in need of prayer.

Baby Ramon was delivered 2 months early, & needs prayer that he can develop properly.

Joao Gabriel is a young man who has had one successful eye surgery, and will have the other eye
done Jan. 20th.

Scherlis is a young mother with significant health problems. She had a second surgery to correct a
problem from a previous surgery. She developed an infection that antibiotics have not helped with.

David (friend of the Weakland’s): Developed pneumonia, and he is now on a ventilator.

Michael Holmes (Geri Faulkner’s Grandson, Dana Holmes’ son): Had two brain surgeries
in October. We did hear he has had some positive improvement. Continue to pray for his recovery.
Remember the family also for comfort and strength.

Lee Dacus: Lee is at home but not doing well.

Bob Mellard’s brother-in-law, Darrell: surgery for bedsores due to 12 years of paralysis