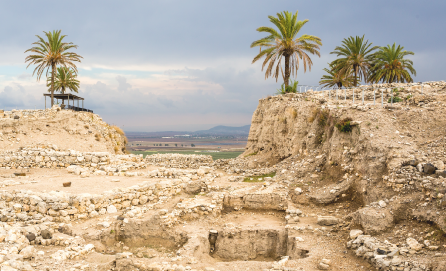 According to skeptics, the writers of Kings and Chronicles were contradictory in their recording of where
King Josiah died. Popular skeptic Steve Wells lists 2 Kings 23:29-30 and 2 Chronicles 35:23-24 as #253 in his
list of “contradictions” in the Bible,1 while the website 1001biblecontradictions.com cataloged these verses as
“contradiction” #250.2 The late skeptic Dennis McKinsey highlighted these verses in one of the early issues of
his journal Biblical Errancy, claiming they represented one of the “simple, straight-forward problems” of the
Bible.3 So what, exactly, do these verses say?
According to 2 Kings 23:29-30:
In his days Pharaoh Necho king of Egypt went to the aid of the king of Assyria, to the River
Euphrates; and King Josiah went against him. And Pharaoh Necho killed him at

Megiddo when he confronted him. Then his servants moved his body in a chariot from Megiddo,
brought him to Jerusalem, and buried him in his own tomb. And the people of the land took
Jehoahaz the son of Josiah, anointed him, and made him king in his father’s place.
On the other hand, 2 Chronicles 35:23-24 reads:

And the archers shot King Josiah; and the king said to his servants, “Take me away, for I am
severely wounded.” His servants therefore took him out of that chariot and put him in the second
chariot that he had, and they brought him to Jerusalem. So he died, and was buried in one
of the tombs of his fathers. And all Judah and Jerusalem mourned for Josiah.
Is there actually a contradiction between these passages, or is there merely an unfair desire for them to
contradict without real proof of such discrepancy? As is the case with most allegations of biblical
inconsistencies, once again skeptics assume (1) the worst, and (2) much more than they can ever prove.
The two accounts of the death of Josiah are not contradictory but supplementary. Just as reading
multiple reports of a current news event should give the reader a more robust view of things, reading both
accounts of Josiah’s death gives us a fuller picture, not a discrepant one. Though Pharaoh Necho had no
quarrels (at least on this occasion) with Josiah and his army (2 Chronicles 35:20-21), nevertheless Josiah
ignored “the words of Necho from the mouth of God” (2 Chronicles 35:22). The King of Judah foolishly
“disguised himself” and went “to fight in the Valley of Megiddo” (2 Chronicles 35:22), where Pharaoh Necho
“killed him” (2 Kings 23:29). The chronicler details that it was the archers (under Pharaoh’s authority) who shot
Josiah (35:23). This difference is not one generally highlighted by skeptics as a contradiction between the two
accounts. Most fair-minded people understand that a “king,” “president,” or some other ruler may be said to
“do something” when, in actuality, he gave the command for it to be done. That is, it was done under his
authority and thus (in one legitimate sense) “by him.” If skeptics can seemingly concede the sensibleness in this
difference between Kings and Chronicles, one wonders why they will not also consider possible, rational
explanations for other differences by two different, independent writers of two different historical accounts?
Could it be that the phrase in 2 Kings 23:29 that “Pharaoh Necho killed him at Megiddo” means nothing
more than it was at Megiddo that King Josiah received his mortal blow, but that his heart actually stopped
beating somewhere else, sometime later? Suppose a man is shot on Main Street but is not pronounced dead
until he’s in an ambulance, halfway to the hospital. Can one not truthfully say (in one sense) that the man was
killed on Main Street—that he received his “dying blow” there, though his brain activity did not technically stop
until he was in the ambulance or perhaps at the hospital? Surely to ask is to answer. Admittedly, a few
translations word 2 Kings 23:30 as Josiah being “carried…in a chariot dead (meeth) from Megiddo” (KJV), but,
as John Haley noted many years ago, the Hebrew term meeth can mean “dying or in a dying state.”4
Furthermore, simply because the chronicler noted “[s]o he [Josiah] died” after he mentioned that
Josiah’s servants “brought him to Jerusalem” (2 Chronicles 35:24) is not proof that Josiah actually died in
Jerusalem. As E.M. Zerr observed in his Bible Commentary: “The statement and he died…is just a common
form of expression in the Bible, where the several facts of a circumstance may be named with very little regard
for their chronological order.”5 Indeed, the chronicler is merely stating the fact that Josiah died and not exactly
when he died. As we have noted in other articles,6 Bible writers often recorded their material topically or
climactically, and not necessarily chronologically. We should no more assume the chronicler was writing strictly
sequentially in 2 Chronicles 35:24 than we should when we ask our spouse to tell us how his or her day went.
(What reasonable person would criticize others for not telling various events in chronological order if that was
not their stated intention?)
The fact that Dennis McKinsey thought so much of the question regarding where Josiah died, even
contending it is one of the “simple, straight-forward problems” of the Bible, should be an indication of just how
weak his case (and others’) is against the Bible. Scripture reveals that Josiah died after receiving his “death
blow” in battle at Megiddo. Precisely when and where he took his final breath, we do not know, nor do we have
to know to exonerate the Bible writers of any proven error in their penning of Scripture.
Endnotes
1 Steve Wells (2013), The Skeptics Annotated Bible (SAB Books), p. 1614. See also pp. 548,642.
2 “1001 Contradictions & Discrepancies in the Christians Bible” (2014), #250, http://
www.1001biblecontradictions.com/I3d%20-%20HOJ%20%5B234-258%5D.html.
3 Dennis McKinsey (1983), “Issue No. 5,” Biblical Errancy, May, p. 29.
4 John Haley (1977 reprint), Alleged Discrepancies of the Bible (Grand Rapids, MI: Baker), p. 376.
5 E.M. Zerr (1954), Bible Commentary (Bowling Green, KY: Guardian of Truth Publications), pp. 279-278, emp. in
orig.
6 Eric Lyons (2005), “Alleged Chronological Contradictions,” https://apologeticspress.org/apcontent.aspx?
category=6&article=1582. See also Eric Lyons (2004), “In What Order Did Satan Tempt Jesus?” https://
www.apologeticspress.org/APContent.aspx?category=23&article=746.

The above article was taken from the following URL: https://apologeticspress.org/did-josiah-die-in-megiddo-or-
jerusalem-5984/