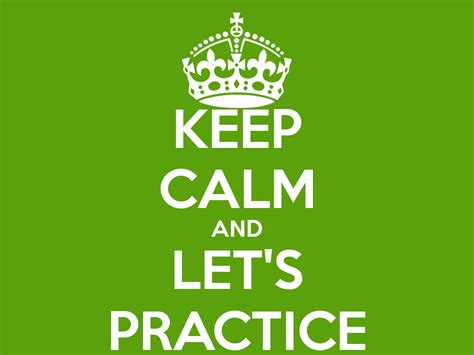 There are very few areas of expertise achieved by men apart from diligent study and practice.

Olympic athletes and other individuals considered to be at the peak of physical human ability are not born that way. They have a regime they have followed, and most of them practice, and practice, and practice, devoting hours a day to improving themselves. Our physicians and surgeons are not considered competent to take us apart and put us back together again without first undergoing years of study and training. There are many more examples that could be given.

A life of godliness doesn’t occur through osmosis.

There are not many activities where constant practice does not improve ability. And there are few activities where, with enough practice, most people can not achieve some competence. Generally, when an individual says, “I could never do that,” what they really mean is that they don’t want to spend the time and energy to learn how to do a thing. Sometimes such thinking is borne out of fear, but if we were to be honest with ourselves, frequently it’s just laziness or a lack of proper motivation on our part.

Why should we think that it is any different in matters of spiritual achievement?

The Bible reminds us concerning spiritual ability, maturity, and our ability to understand the Bible: “For everyone who partakes only of milk is unskilled in the word of righteousness, for he is a babe. But solid food belongs to those who are of full age, that is, those who by reason of use have their senses exercised to discern both good and evil (Hebrews 5:13-14; NKJV).”

Let us first notice that it is possible to be “unskilled” in God’s word; implying that it is fully possible to be “skilled.” This skill is achieved, not through the passage of time, but through, “reason of use,” and, “exercising” the senses to discern good and evil. In other words, spiritual ability and spiritual talents get better with practice and exercise, just like any other skill.

Have you considered the fact that Jesus Christ, the Son of God, made like us in every way, and partaking of the full human experience, had to study to get better with God’s word? We find Him engaged in a Bible study at the age of 12, and when found doing so, He identified the study as His Father’s will (cf. Luke 2:46-49). Thereafter we read that Jesus, “increased in Wisdom and Stature (Luke 2:52).” Jesus grew to be a wise man, because, from a very young age, He applied Himself to obtaining that wisdom. He became good at doing the right thing because he practiced constantly doing the right thing, so that He could say of His relationship with God, “I always do those things that please Him.” (John 8:29)

But someone will say, “Well Jesus was God in the flesh, I could never be like Him.” As in so many other things, however, such a statement is more of an excuse not to try than it is a valid argument.

God wants us to try to be more like Jesus. The term “Christian” means, “Christ-like.” The Scriptures encourage us, telling us that we should look to the example of Jesus as our model for love, forgiveness and many other things (cf. Ephesians 5:2; 1 Peter 2:21; etc.) In fact, God very clearly tells us in His word that the goal is to grow spiritually, to reach the measure of the fullness of the stature of Christ (Ephesians 4:13). You might want to declare that you can’t grow spiritually, but God says you can, and that you should, even if such an endeavor is going to take effort on your part.

Sure, chances are pretty good that if you begin the process of spiritual growth, at some point you are going to falter. But it is only when we stop practicing that we stop improving. Don’t sell yourself short. God sees great potential in you. Don’t let laziness, fear, or indifference prevent you from achieving that potential. It takes practice, but the more you practice, the easier it gets.