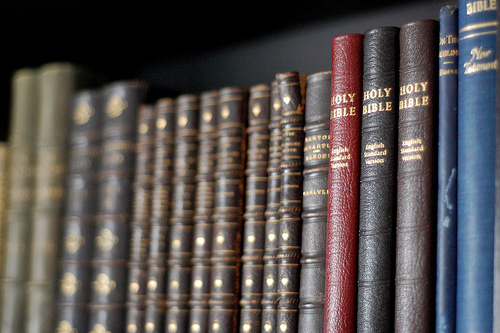 To imagine what it would have been like for those who, in the first century, received the books of the New Testament which had just been written and sent to them is beyond comprehension. Before the books were written, there were apostles and prophets who could tell them about Jesus, about His life and the new way of living He revealed. However, they were not always present. Then, for the first time, the churches had a handwritten copy of the Bible, and they could assemble and study together.

Not every person was able to read, so there were those who read these words given by God while others listened, trying to remember every word God had given to them. The Bible describes this. “Blessed is he who reads and those who hear the words of this prophecy…” (Rev. 1:3). Now, for the first time they held in their own hands the message from heaven. That verse adds one other vital truth about the one who is blessed because he has a Bible. It adds, “and keep those things which are written in it.” The real blessing is not found in just reading or hearing God’s words. That blessing comes when the words are taken and written in our hearts and manifested in our lives.

What a contrast between the church as it began and that which is part of our world! We no longer have heaven’s message in heavy scrolls but in beautiful, leather-bound books. The widespread use of cell phones allows many of us to carry the entire Bible in a compact device we keep in our pockets and purses. How blessed we are!

Yet what has happened? Across our lands believers assemble, yet Bibles are often not present. We have decided that study in Bible classes is more focused on what some modern man has written about the will of God instead of going to the original truths. Sometimes those studies become a discussion about what each person thinks about a matter instead of searching the words of the Bible to see what God has said about these same issues.

Pulpits are filled with gifted speakers, or those who have read their messages, and for the moment we are fascinated by their ideas, but it is far removed from what happened in the early church. They read the very words given by God, they heard the words given by God and they left worship determined to remember these words to change their lives.

Think about this contrast and then when you open your Bible realize you have the message from heaven. Read the Bible with the joy of those early Christians. Their lives were changed because they realized the treasures which were theirs because finally they held the words from heaven. Have that same joy because you have your own copy of these words!