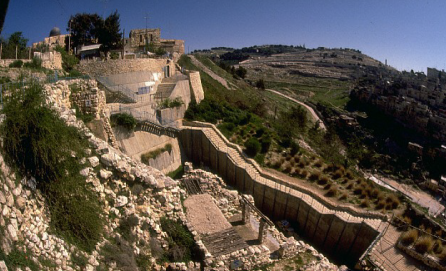 Of all the men in the Old Testament, few are spoken of with such reverence and honor as King David—shepherd, psalmist, soldier, and king. With God’s mighty power behind him, he slew a bear and a lion to save his father’s sheep, toppled a wicked giant with a single stone, slaughtered thousands of godless Philistines, and united the children of Israel under a monarchy of righteousness and justice. The Bible mentions David some 1,048 times. He wrote 73 of the psalms and stands as the major character in approximately 62 chapters of the Old Testament. Anyone who has ever read the Good Book cannot help but know the name of David—a man said to be “after God’s own heart” (1 Samuel 13:14). And those familiar with the modern-day nation of Israel know that its flag proudly bears a symbol known as the Star of David.1

Yet, if the Bible is removed from the discussion, David—King of Israel—vanishes into the shadows of secular history. At least he did for almost 3,000 years. David’s name and story were conspicuously missing from either archaeological evidence or the testimony of history. His name was so absent, in fact, that for many years skeptics had dubbed David’s life as fantasy and his deeds as legendary. After all, every nation needs a hero who slays giants. The Saxons had Beowulf, the Greeks had Hercules, and the Jews had David. David’s daring deeds and courageous conduct were relegated to the fabled heaps of legend and myth.

But a find unearthed in Palestine in 1993 changed David’s status in secular history forever. Professor Avraham Biran, director of the Nelson Glueck School of Biblical Archaeology at Hebrew Union College, was digging at a site in northern Israelite known as Tel Dan. There he unearthed a 3,000-year-old black basalt obelisk inscribed by one of the enemies of the ancient nation of Israel. The obelisk explained that Ben Hadad, King of Damascus, had defeated the Israelites and taken many of them captive. But the most amazing aspect of the obelisk is that it plainly states that the Israelite monarch defeated by Ben Hadad was “of the house of David.” This serves to confirm the biblical usage of this very designation (cf. 1 Kings 12:19; 14:8; Isaiah 7:2; et al.). And, for the first time in secular history, David appears connected to Israel from a historical standpoint. The implications of the stone cannot be ignored. If a king—any king—reigned who belonged to the “house of David,” then there must have been a real, historical David who established such a house and began the dynastic name.

The story of David thus has assumed a new place in the halls of history. No longer can David, King of Israel, be relegated to the status of myth or legend. Instead, he takes his rightful place beside the other documented kings of ancient history. David lived, just as the Bible had stated. And once again, the Bible remains the anvil on which the blows of the skeptic fall in vain.

The above article was taken from the following URL:https://apologeticspress.org/APContent.aspx?category=13&article=849