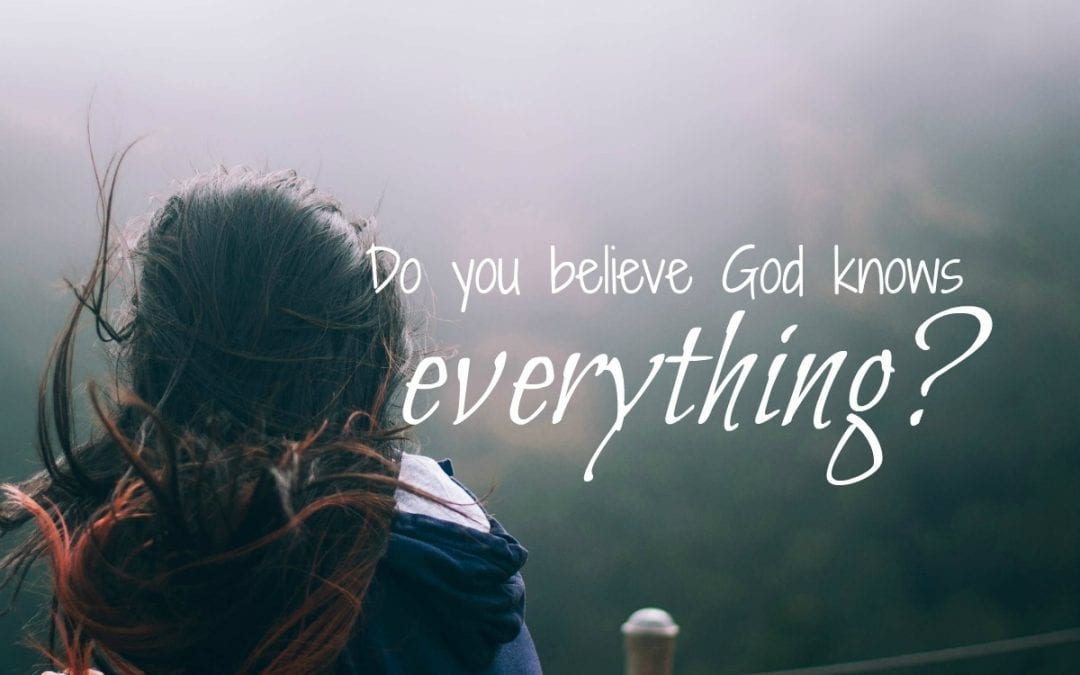 Numerous passages of Scripture clearly teach that God is omniscient. The Bible declares that God “knows the secrets of the heart” (Psalm 44:21), that His eyes “are in every place” (Proverbs 15:3), and that “His understanding is infinite” (147:5). Of Jehovah, the psalmist also wrote:

O Lord, You have searched me and known me. You know my sitting down and my rising up; You understand my thought afar off. You comprehend my path and my lying down, and are acquainted with all my ways. For there is not a word on my tongue, but behold, O Lord, You know it altogether…. Such knowledge is too wonderful for me; it is high, I cannot attain it. Where can I go from Your Spirit? Or where can I flee from Your presence? If I ascend into heaven, You are there; if I make my bed in hell, behold, You are there (139:1-4,6-8).

The New Testament reemphasizes this truth: “God is greater than our heart, and knows all things” (1 John 3:20, emp. added). Not only does He know the past and the present, but the future as well (Acts 15:18; cf. Isaiah 46:10). According to the Bible, there is nothing outside of the awareness of God.

Atheist Dan Barker, however, alleged in his February 12, 2009 debate with Kyle Butt that the Bible paints a contradictory picture of God and His knowledge. Whereas some scriptures indicate that God knows the future, supposedly, the God of the Bible cannot exist because other passages reportedly teach that God does not know the future. Twelve minutes and 54 seconds into his first speech, Barker exclaimed:

Look what God said after he stopped it [Abraham’s sacrifice of Isaac—EL]. He said: “Lay not thine hand upon the lad, neither do thou any thing unto him: for I know now, I now know, that you fear God, seeing that you have not withheld thy son.” I know now? I thought God knew everything. The Bible says God knows the future but here He is saying, “I didn’t even know.” The Bible even says that God searches and understands all the imaginations of the heart. The God of the Bible knows the future. The God of the Bible does not know the future (2009).

Is Barker correct? Does the Bible paint a contradictory picture of God’s knowledge? Do some passages testify to the omniscience of God, while others indicate that He is finite in His understanding?

The kind of language found in Genesis 22:12 actually is present throughout Scripture. As early as Genesis chapter three, God asked Adam, “Where are you?” (3:9). In Genesis four, He asked Cain, “Where is Abel your brother?” (4:9). The book of Job reveals that at the beginning of God’s first speech to Job, God asked the patriarch, “Where were you when I laid the foundations of the earth?” (38:4, emp. added). Are we to assume questions like these or statements like those found in Genesis 22:12 and 18:21 (“I will know”) imply a lack of knowledge on God’s part?

First, one must acknowledge that questions often are asked and statements frequently are made for a variety of reasons. Are we really to assume that the Creator of heaven and Earth was ignorant of Adam’s whereabouts when He asked him, “Where are you?” (Genesis 3:9)? Are we to believe that God did not know where Job was when He made the world (Job 38:4)? Certainly not! What father, having seen his son dent a car door, would imply ignorance by asking, “Who did that?” Obviously, the father did not ask the question to obtain information, but to see if the son would admit to something the father knew all along. On occasion, Jesus used questions or made statements for the same purpose. When He questioned the Pharisees’ disciples and the Herodians regarding whose inscription was on a particular coin, it clearly was not because He did not know (Matthew 22:15-22). Likewise, when Jesus asked the multitude that thronged Him, “Who touched Me?” (Luke 8:45), it was not because the woman who touched Him was hidden from Him (Luke 8:47). Jesus knew the woman who was made well by touching His garment before she confessed to touching Him (Mark 5:32). His question was intended to bring attention to her great faith and His great power (Mark 5:34). In no way are the questions God asks or the statements He makes an indication of Him being less than omniscient.

Second, the term “know” (Hebrew yada, Greek ginosko) or one of its derivatives (i.e., knew, known, etc.) is used in Scripture in a variety of ways. Several times it is used in reference to a man and woman having sexual intercourse (Genesis 4:1,17,25; Judges 11:39; 19:25). Jesus used the term to refer to His regard for His sheep (i.e., people—John 10:27). In contrast to the way of the wicked that will perish, the psalmist wrote that God “knows” (i.e., approves, takes delight in, etc.) the way of the righteous (Psalm 1:6). Paul used the term “know” in Ephesians 3:19 in the sense of knowing “experimentally what intellectually is beyond our powers of knowing”—the love of Christ (Jamieson, 1997). The fact is, like so many words in Scripture (and in modern times) the word “know” has a variety of meanings. What’s more, neither Dan Barker nor any Bible critic can prove that the term “know” in Genesis 22:12 directly contradicts God’s omniscience.

Third, the Bible’s usage of phrases such as “now I know” (Genesis 22:12) or “I will know” (Genesis 18:21) in reference to God actually are for the benefit of man. Throughout the Bible, human actions (such as “learning”) frequently are attributed to God for the purpose of helping us better understand His infinity. When Jehovah “came down to see the city and the tower” built at Babel (Genesis 11:5), it was not for the purpose of gaining knowledge. Anthropomorphic expressions such as these are not meant to suggest that God is not always fully aware of everything. Rather, as in the case of Babel, such wording was used to show that He was “officially and judicially taking the situation under direct observation and consideration” (Morris, 1976, p. 272). Almighty God visited Sodom and Gomorrah likely “for appearance’ sake, that men might know directly that God had actually seen the full situation before He acted in judgment” (p. 342). “These cities were to be made ensamples to all future ages of God’s severity, and therefore ample proof given that the judgment was neither rash nor excessive (Ezek 18:23; Jer 18:7)” [Jamieson, 1997]. Similarly, in the case of God testing Abraham regarding Isaac, although God already knew what Abraham would choose to do, there still was a reason to allow Abraham the opportunity to actually show his great faith and know that God indeed had witnessed (in real time and not just in His foreknowledge), Abraham’s actions. God came “to know” of Abraham’s faith by actual experiment. The meaning of the phrase, “now I know” (Genesis 22:12), therefore, “is not that God had, by the events of this probation, obtained information regarding Abraham’s character that He did not previously possess; but that these qualities had been made apparent, had been developed by outward acts” (Jamieson, 1997).

Similar to how God instructs man to pray and make “known” to Him our petitions for our benefit (Philippians 4:6), even though He actually already knows of our prayers and needs before they are voiced (Matthew 6:8), for our profit the all-knowing God sometimes is spoken of in accommodative language as acquiring knowledge.

The above article was taken from the following: https://apologeticspress.org/AllegedDiscrepancies.aspx?article=787&b=Genesis